There are no closures planned at present.

C&M Models are delighted to have been appointed as a stockist for this new manufacturer with their excellent models. Initially, we have available their ‘HUO’ 24.5T Coal Hoppers in both ‘O’ and ‘OO’ scales, and the ‘PCA’ and ‘PCV’ Cement wagons in ‘OO’ scale.

Also in stock are the ‘PFA’ coal container wagon packs, in Cawoods, British Fuels and British Gypsum liveries. The half-height nuclear waste containers are almost sold out as this is written. 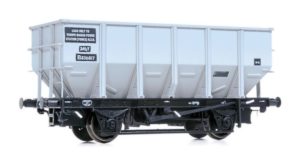 We are also taking advance orders for their ‘OO’ scale models of the ‘JSA’ bogie steel coil carriers. Click this link for further details.

Also, Accurascale have just announced a new high-specification models of the Class 37 diesel which is due for release towards the end of 2020. The model will cover the 37/0 in BR green and blue liveries, as well as the Class 37/6 in DRS and Rail Operations Group colours. There are also a number of Scottish based 37s planned. Click on this link for further details

THE ‘LOGS’ ARE COMING TO CARLISLE!

Revolution Trains have announced their intention to produce the Touax owned bogie log carrying wagons used on the Carlisle – Chirk Kronospan log carrying train. Initially in ‘OO’, and then later in ‘N’.

No price or release date has been announced yet, but we are happy to take advance orders or expressions of interest.

The original ‘Cargowaggon’ and Norsk Hydro vans, that provided the chassis for the log wagons are also being produced.

Revolution Trains have announced that the ‘IPA’ car-carrying wagons that they are producing in ‘N’ gauge, are now to be produced in ‘OO’ scale.

We are taking expressions of interest in these wagons. Once final details of what models are being produced are known, we will contact you to finalise orders.

Please phone, or e-mail us at sales@candmmodels.co.uk to register your interest.

We are a leading stockist within the UK for this Italian manufacturer of ‘HO’ models. Their range covers locomotives, coaches and wagons from many European countries. We have a good stock of their items, and can also accept pre-orders on future releases.

C&M Models are an appointed stockist of the normally-crowdfunded range of Cavalex Models.

The next model to be released is the superbly detailed ‘BBA’ steel carrying bogie flat wagon. Delivery is expected in Spring 2020.

Click on this link to go our online shop, where the various models are shown

We are carrying ever greater stocks as these Hornby International ranges to continue to expand. We have a number of items on our online shop, but we also welcome any advance orders for items which may not be listed. If in doubt, then please contact us.

One of the highlights for autumn 2020 release are the coaches for the luxury “Venice-Simplon-Orient Express” which appears on the rails of mahy countries. Advance ordering is recommended as we expect these coaches to be very popular.

2020 Announcement. We are taking pre-orders on items due for release during the year. Please note that some of the items are very limited, and as such are already sold out prior to release. 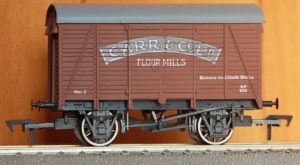 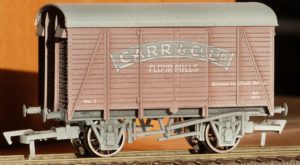 Following on from the success of our Carr & Co. biscuit manufacturers van, we have commissioned a further van from the same group of companies. This time it is the Carr & Co. flour mills at Silloth. This time, we have had made a pristine version, as well as a weathered version, the weathering being done in white to reflect the colour of flour powder.

Both wagons are now available from stock. Price is £13.75 for the unweathered van, £14.75 for the weathered version. Orders can be placed online

(click on this text to go to the relevant section of our online shop), or over the phone, or in the shop.

Our 2018 exclusive edition is the “Keswick Co-operative Society Limited” 7-plank open wagon. With acknowledgement to the Cumbria Railways Association for providing the photograph of the prototype, this wagon is very much associated with the heart of the Lake District.

Price is £14.60, plus postage if applicable, Orders can be placed online

(click on this text to go to the relevant section of our online shop), or over the phone, or in the shop.

We still have very limited stocks of this 7-plank open wagon left.

Mealsgate is a village on the A595 road from Carlisle to Cockermouth, and was on a branch line from Aspatria.

Price of the wagon is £13.20, plus postage, if applicable

Our latest exclusive wagon, from autumn 2019, is this 7-plank wagon from the Carlisle-based coal merchants, James McKay.

These locomotives were used on the first freights that passed through the Channel Tunnel after it opened, working as far as Dollands Moor, before the Class 92s were available. LS Models produce excellent, detailed models and these would be something very different for your British-based layout. We also have a set available fitted with DCC Sound

Iconic One Theme | Powered by Wordpress